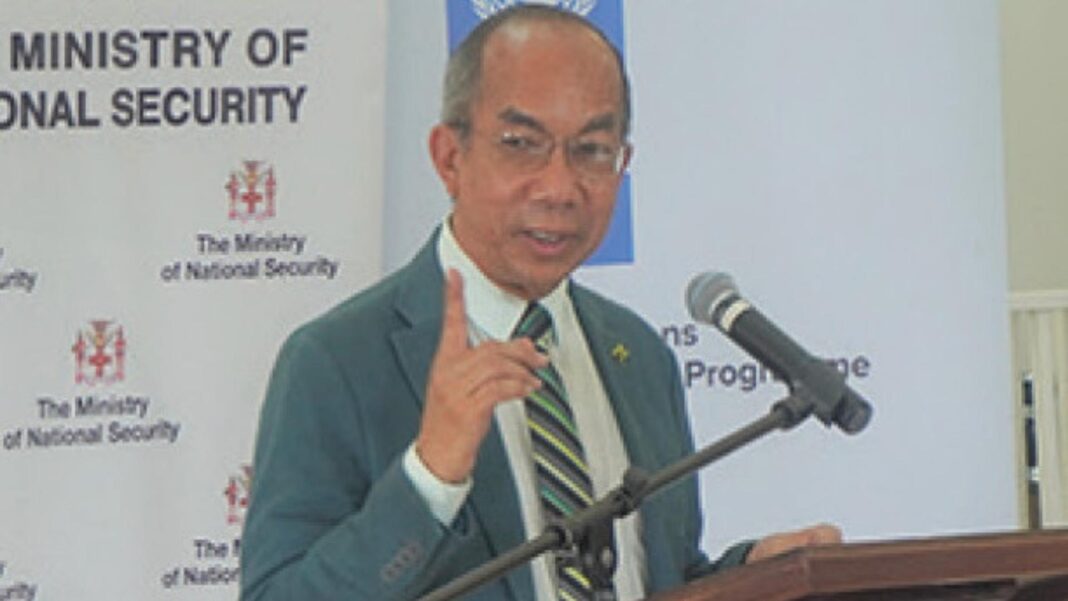 Since the start of the year, more than 380 illegal firearms and over 7, 511 assorted pieces of ammunition have been seized by the Jamaica Constabulary Force (JCF).

The revelation was made by Deputy Prime and Minister of National Security, Dr. Horace Chang, during the recent launch of the United Nations (UN) programme to reduce small and lightweight weapons in the country. On Friday, June 17, Jamaica officially became one of two countries to benefit from the 12-month pilot programme, which is being funded by the Saving Lives Entity (SALIENT) Fund operated by the UN.

Speaking at the recent launch of the project in MontegoBay, St James, Dr. Chang explained that the proliferation of illegal firearms, their parts and ammunition, has been a major contributing factor to an increase in murders across the island.

“The proliferation of firearms, resulting in increased access in Jamaica, is a direct catalyst for murders committed when mixed with the propensity for violence among criminal gangs in environments that engender poor dispute resolution,” the Minister explained.

While expressing appreciation for Salient’s support, particularly in the communities of Norwood and Denham Town, the Minister further explained that firearms such as handguns have been the weapon of choice for major crimes in Jamaica, citing murders committed from January 1 to June 17, 2022.

Statistical data provided by the JCF indicate that over 680 murders have been committed since the start of the year.

Minister Chang noted that “Pistols and revolvers are the most frequently recovered firearms as they are preferred by criminals for flexibility, conceal-ability, price and access to ammunition”.

Last year approximately 342 guns and over 4,934 pieces of assorted ammunition were seized. According to the Minister “The issue of firearms proliferation can be separated into supply-side and demand-side issues.”

Consultations with the Contraband Enforcement Team of the Jamaica Customs Agency revealed that transnational factors significantly impact the demand and supply of firearms across the country. He added that Jamaica does not produce firearms locally and, as such, all firearms present in the country made their way through either official or unofficial points of entry.

“Firearms are smuggled through official ports of entry by breaking them down into parts among shipments, which are then more difficult for officials to detect. Additionally, the porous nature of the borders, makes it difficult to police due to numerous unofficial points of entry and the issue is further compounded by corruption,” said Dr.Chang.

Dr. Chang pointed out that while law enforcement has successfully tracked and apprehended illegal gun holders, some of whom are now convicted felons, the sparsity in convictions in comparison to the retrieval of illegal guns has prompted the Government to revise its strategic response to the illicit gun trade. This he says is a contributing factor to an influx in gender-based violence, particularly femicide by firearm.

“We anticipate training and support from the UN for the development and adaption of policies on addressing the use and possession of firearms in school settings to foster the consolidation of an inter-institutional working group at the national level”, said Dr. Chang, pointing to the importance of other initiatives that support ending violence against women and girls.

The security minister also spoke of the gun-for-drugs trade in the region, stating that the trade extends to using guns as payment for food and other goods in Jamaica, Central America, and Haiti.

Salient, which is aligned to Jamaica’s National Development Goals, serves to enhance Jamaica’s legislative and institutional framework to regulate access to small arms, their parts, components and ammunition.

A Bill to Replace and Repeal the Firearms (Prohibition, Restriction and Regulation) Act is currently before the Joint Select Committee of Parliament. The New Bill is targeted at ensuring greater prohibition, restriction and regulation of firearms and ammunition, and for connected matters.