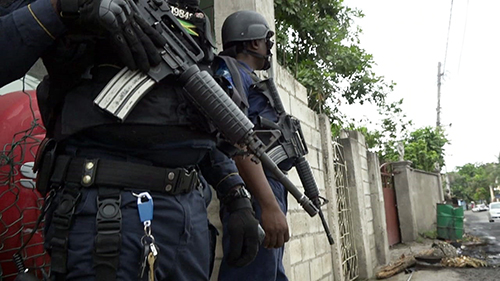 The unchecked robbery spree of noted gangster, 30-year-old Roger Danville, otherwise called ‘Rasta’ of Norwood, Montego Bay, who has been fingered by the police in a number of daring robberies committed in the parish, some of which have been captured on security cameras, came to an end on Sunday when he was shot and killed during a confrontation with a joint police military team.

Reports are that minutes after 10 Sunday night, the police/military team, acting on information derived from the videos and intelligence, tracked down Danville to an area of Blood Lane in Glendevon where a running gun battle allegedly ensued between him and the lawmen.

The shooting reportedly subsided approximately 10:50 when the police discovered Danville’s lifeless body, with him reportedly clutching an Uzi sub-machine gun.

Danville and a number of his cronies are purported to have been involved in numerous robberies across St. James and other western parishes, where videos of their nefarious acts have gone viral.

Meanwhile, in another police operation carried out earlier on Friday at Blood Lane, another gangster, who also featured on the robbery videos, was arrested and charged and a firearm seized.

He is 28-year-old Obrian Grey, a truck driver of Hendon, Norwood, St. James.

Reports are that about 12:45 p.m., lawmen were in the Blood Lane area of Glendevon when they saw a group of men at a shop, stopped and searched them. Grey, who was not in possession of any form of identification, was questioned. Further investigations led the police to his house in Beverly Hills, during which one Taurus 9mm pistol with a magazine containing ten 9mm rounds of ammunition, was seen inside his bedroom.